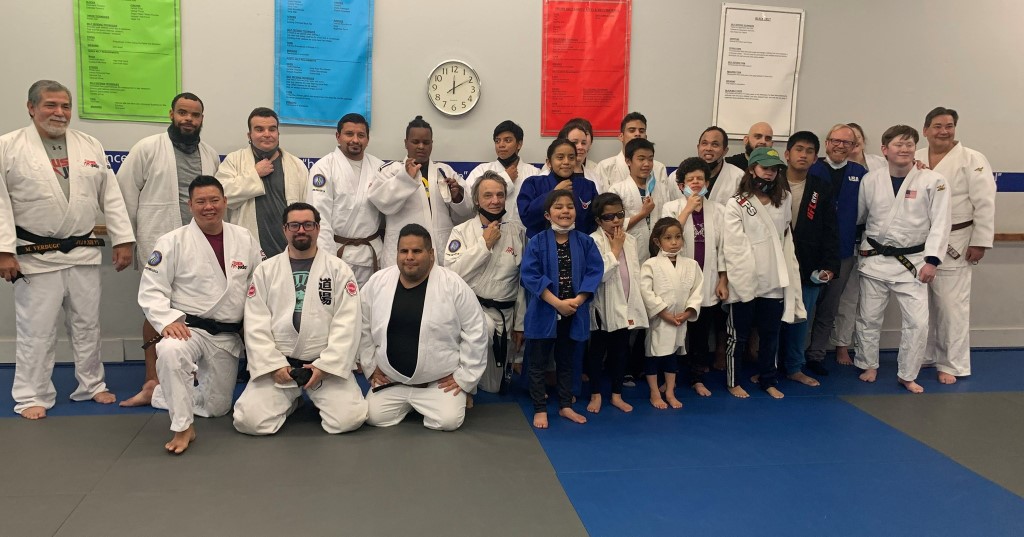 Saturday, February 12, 2022, Hollywood PAL hosted a USA Judo sanctioned clinic for twenty visually impaired youth and adults. In preparation for the Los Angeles 2028 Paralympic Games and beyond, it’s important to encourage newcomers to the sport at a grass roots level now so we can be more competitive in 2028.
Special guest instructors included Judo Paralympian Robert Tanaka and the 2021 USA Judo Paralympic Head Coach, Heidi Moore. Hollywood PAL Martial Arts students Miguel and Yaritssa during at the clinic too.
“The Los Angeles area has the highest number of Judo players in America, in both the Olympic and Paralympic disciplines,” said clinic organizer, Michael Verdugo. Mike oversees USA Judo’s Play LA Program featured in 16 LA Recreation Centers and is a member of USA Judo’s Police Professionals & PAL (P3) Program. “I’ve been fortunate to work with several Paralympians and want to help build the Paralympic Judo Pipeline as we prepare for the 2028 Olympic Games here in LA.”
“Working with Mike, Heidi, Hollywood PAL and long-time administrator for blind sports, Mark Lucas, allows us to introduce Paralympic Judo to some new players while fine-tuning the skill of existing visually impaired Judoka,” said USA Judo CEO, Keith Bryant. “The beauty of Paralympic Judo is that it is essentially the same except that the visually impaired athletes start with a grip on each other’s judogis, rather than jostling for a grip. Our hope is that this clinic is the beginning of a longer-term Paralympic Judo Development Program in the LA Area,” said Bryant. The clinic was free of charge and USA Judo provided one-day temporary memberships to participants not yet members of USA Judo.
Stay tuned for more clinics throughout the year as Hollywood PAL continues to engage the community and drive positive change.