The Community We Serve

For most of the world, Hollywood is a legendary city of dreams that conjures up images of celebrities, wealth and glamour. Unfortunately, the children who live here know an entirely different Hollywood, with many growing up in impoverished neighborhoods surrounded by gangs, drugs, violence, and other crime. LAPD Hollywood’s Gang Unit reports that there are at least 23 known active gangs, tagger (graffiti) crews, and party crews in Hollywood.

Teachers and school officials do wonderful work in support of children and families, but still there seems to always be more youth in need in our city’s most high-risk communities. According to Youth Policy Institute, Hollywood’s most challenged neighborhoods have 85% of children living in poverty and an 18.6% unemployment rate, which is almost twice the county level. Less than 50% of area students graduate from high school.

Hollywood PAL serves low-income youth (with at least 92% qualifying for the free school lunch program) grades K-12 at risk for involvement in juvenile crime in the Los Angeles area, particularly Hollywood and its environs. PAL officers actively recruit in local schools (with a focus on middle school-aged children) and at community resource fairs. PAL provides quality activities to over 600 children per year. The program not only benefits the student, but also indirectly benefits their families and the larger Hollywood community. Without protective factors and positive adult role models to support, motivate, and lead by example, many youth turn to gang involvement to create a sense of family. 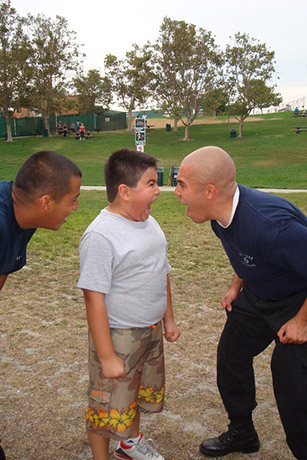 “My opinion of police officers has changed because now I know how hard people have to work to protect the community.””